GREAT OFFER! We've hit 100 000 site visitors today! To celebrate we are giving away TEN "Ants of South Africa" at 30% off, plus FREE ant wrapping paper AND mini-microscope! Only applies to the first ten customers! ONLY ONE LEFT!!!

Go HERE . Add the book to your cart and go through the normal Check Out [NO cash payments please - only credit card]. At Check Out enter this discount code: 100000 ants - just like that. Your order will be discounted by 30% . We recommend you choose 'Courier' for delivery; you'll receive the book, the paper AND the mini-microscope.
BUT HURRY! Only ONE MORE will receive the discount and freebies.
See this great review, 29 August 2018:

Johan said: The most fun field guide combo ever!


I received the book with microscope and posters this morning, and this was the most fun package I've opened in a long time. Not only is the book packed with excellent information and brilliant photos, the little microscope had me running all over the house inspecting things in minute detail. No book, coin, food or computer screen was missed. Next was the poster, which is much more than simply a poster with some ants printed on it. I will not spoil the secret, but I can say that it provided about an hour of head-scratching between me and the kids and in the process learning about more than just ants.

5 September 2017
A radical revision, updating and correcting of most of this blog has commenced, and will be ongoing for some time. Watch this space!

2 January 2016
* Catalogue revised and updated, especially with regard to Polyrhachis

14 November 2015
* Some revision to the Camponotus page, including new pics of C niveosetosus that we think take our pics to a new level!

29 September 2015
* new species, Meranoplus peringueyi, added
* keys updated with some new ants and new illustrations; some text updated too
* NEW NEW: internet links to the best pics of many of these species as these appear on iSpot now included. If our keys leave you in doubt [they’re bound to, sometimes!] have a look at these pics – they will help!

6 September 2015
Surveyed the spread of Argentine ants [Linepithema humile] at Eselbank in the eastern Cederberg; these were the first sign of these invaders we have found in the Cederberg, comfortably surviving in the village and in the surrounding veld at an altude of over 1000 metres, with extremes of cold and heat in winter and summer. There are several myrmecochorous plants in the area including the threatened Serruria flava. 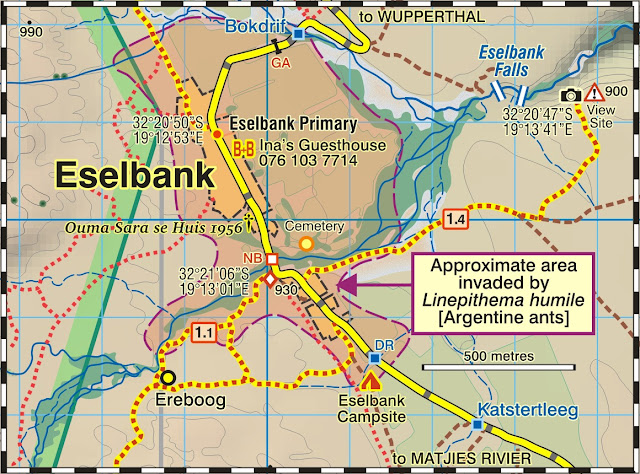 13 May 2015:
Great pic and info about Dorylus helvolus

23 April 2015:
FANTASTIC NEWS: We have discovered someone who’s been doing it for ages [atlassing ants that is!]. Iimbovane [= ‘ants’ in Xhosa] is an outreach project from the Dept of Entomology at Stellenbosch University that has been involving high school pupils from a wide range of communities in ant atlassing! Iimbovane’s website says:
The Iimbovane Project is a long term monitoring project which focuses on ant diversity in different natural and modified (developed or transformed) landscapes, investigating how ant groupings change in space (between places) and over time (between seasons and years). The project involves educators and learners from secondary schools who assist with the monitoring through direct participation in on site sampling.
Iimbovane aims to educate and raise awareness levels of educators and learners on the importance of biodiversity and to increase and improve scientific biodiversity, eventually providing a general picture of ant species composition in different Western Cape biomes over a 10 year period.


9th April 2015:
William Bond and Peter Slingsby resumed their re-surveying of the Oudebosch area, a follow-up to their research of 1981 that established the extent of Argentine ant invasion in the area.
As indicated last year, we were astonished to find that by and large the Argentines (Linepithema humile) had disappeared from much of the area, and were now confined to several small ‘pockets’ that seemed to be separated from each other. The possible effects of the 2011 fire, or a new wave of invasion by Big-headed house ants (Pheidole megacephala) need further investigation. The survey is not yet complete ... more anon.

25 March 2015:
Noticed by granddaughter Frieda, the astonishing remains of hundreds of invasive Argentine ants (Linepithema humile) and invasive White-footed ants (Technomyrmex albipes) that had apparently been engaged in a deadly battle. Wish we'd seen this Battle of the Aliens live! 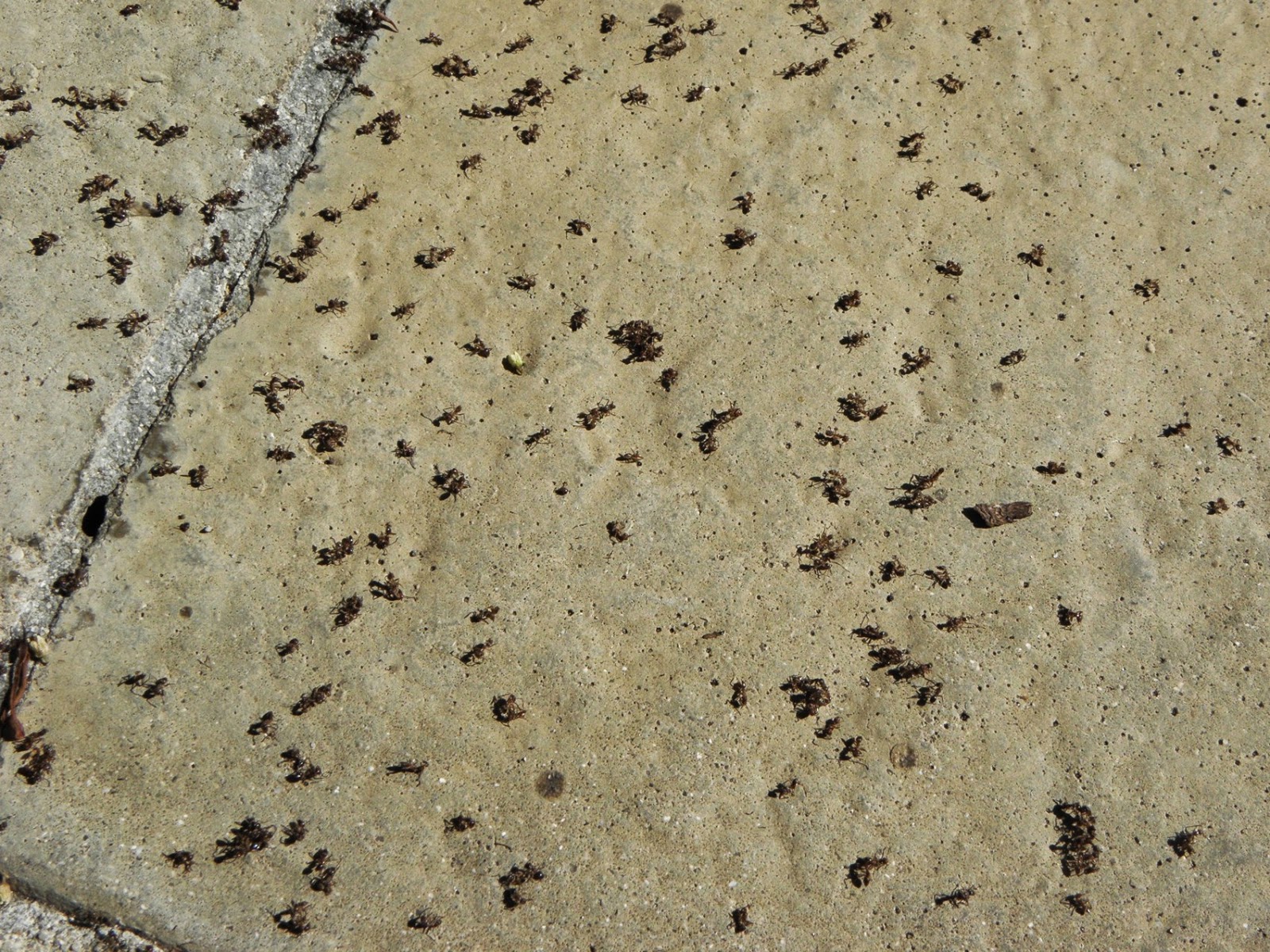