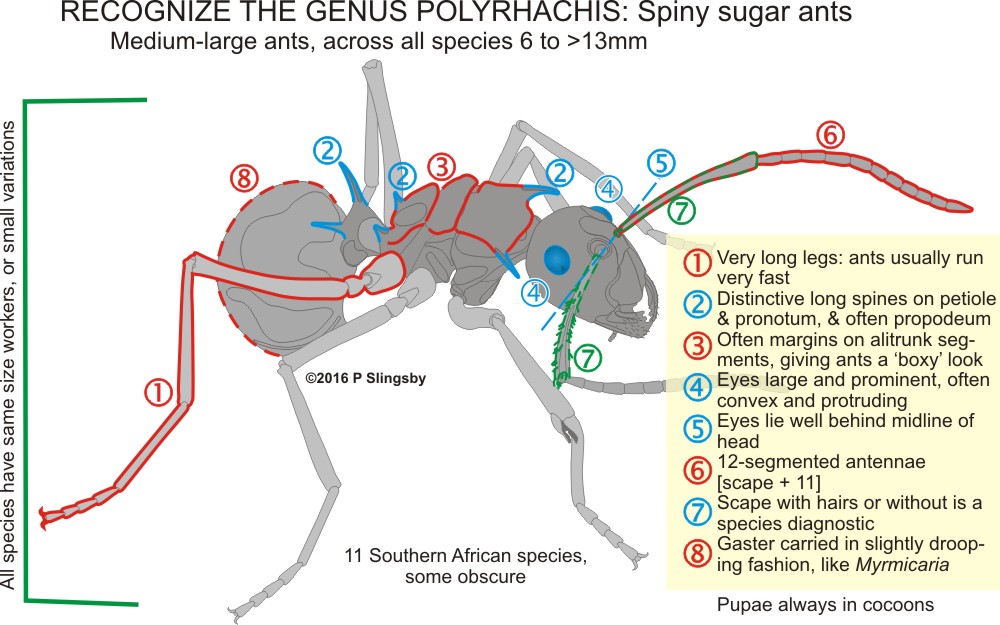 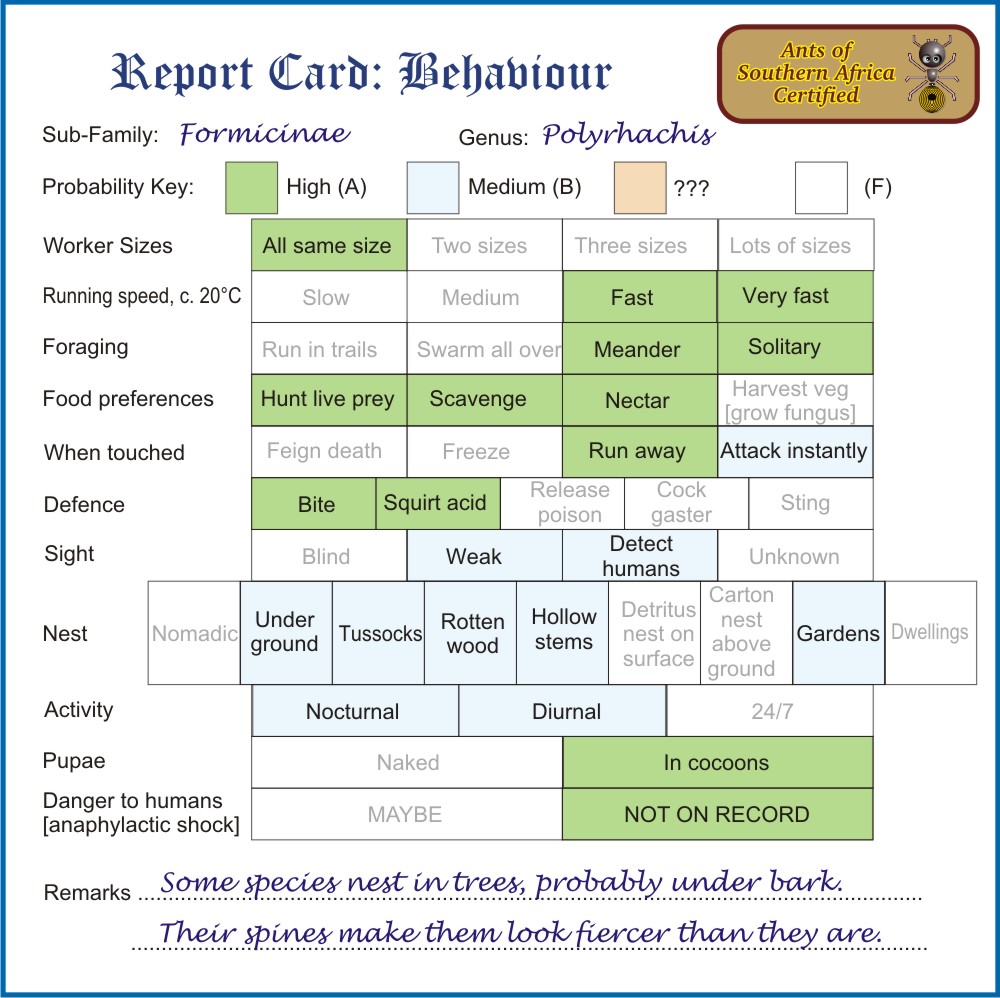 ‘Polyrhachis’ means ‘many spines’ in Greek; it’s a prominent genus throughout the warmer parts of the Old World with over 600 species, but only eleven of these occur in our area. The relationship to other Formicine ants, especially Camponotus, is reflected in the shape of the head, which is similar in most respects to the heads of minor or media camponotine workers. However, the outstanding characteristic of Polyrhachis are the impressive spines: from two to six on the petiole flange, two on the leading edge or pronotum of the alitrunk [thorax], and often smaller spines on the propodeum or hind edge of the alitrunk. The purpose of these spines is quite unknown, of course.
The alitrunk often has prominent margins, giving the ants a ‘boxy’ or armoured look. The antennae are always 12-segmented [scape + 11] and the eyes are well-developed and usually convex and bulging out from the head. All the species are basically black, but various levels of pubescence often mask this. The ants do not sting, but squirt formic acid when alarmed. The larvae pupate in cocoons, but the ants also use the larvae to spin silk which is used by some species to line the nest entrance or to protect the nest.
The different species vary in size from workers of about 6mm up to 13mm; within a species the size in the same nest can vary slightly, but there are no clear-cut majors and minors. The species are presented below in order of size, from largest to smallest.

Polyrhachis ants are used in herbal medicine in China. An extract in powdered form is mixed with water or fruit juice and/or a little alcohol and taken as a few drops a day. Supposedly even more effective than Ginseng, the stuff is exorbitantly expensive and all the online ads carry a disclaimer: “This product has not been evaluated by the Food and Drugs Administration. This product is not intended to diagnose, treat, cure or prevent any disease.” There are at least 14 benefits listed, including ‘sex builder and aphrodisiac’ [of course], slows ageing and beefs up almost every other bodily function you can think of.
We don’t, however, recommend eating raw Polyrhachis ants. At $44 for 100 g the extract [mostly water and a drop of alcohol] is a snip!

These are the largest Polyrhachis in our region, with workers from about 9 to 14 mm depending upon the colony and/or locality. 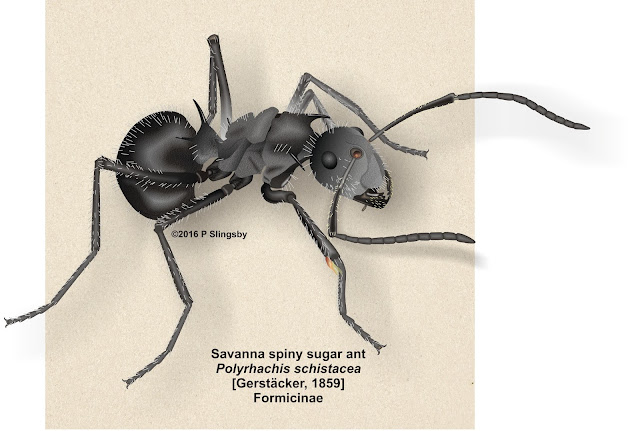 A common, soil- or grass-nesting, savannah species with a very wide distribution in sub-Saharan Africa, although not in the rain forest, it’s the most widespread spiny sugar ant in our region, occurring in every province except the Western Cape and the Free State.
Their colour is overall dull black, but with their extreme pubescence they usually appear grey; they also have very numerous erect hairs on all parts of the body. On older individuals the pubescence may have worn off some of the gaster, giving a patchy, dull-shiny appearance. Erect hairs occur on the antennal scapes. 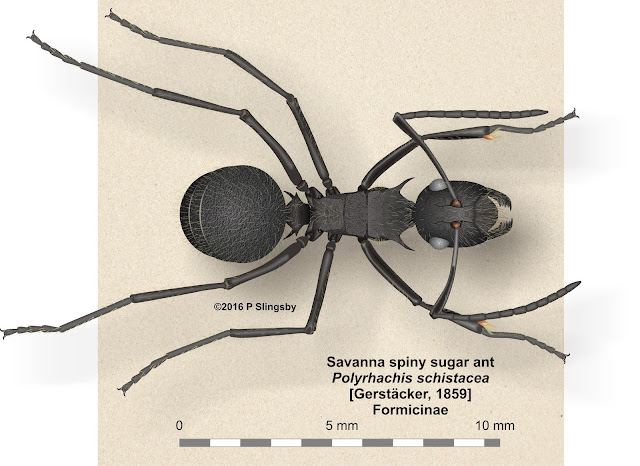 These are almost the same size as the species above, in a worker range from 11 to 13 mm.
P. gagates is a ground-nesting species of dry savannah and scrub, occurring in Central and East Africa; in South Africa mainly in Mpumalanga and Kwazulu-Natal.
The colour is black throughout, with a dull or slightly shiny head and alitrunk and the gaster is always highly polished; there is no more than very fine pubescence and few if any erect hairs. No erect hairs on antennal scapes.
The nest entrance and first section of the entrance tunnel is usually lined with woven material and silk.
The lateral pair of petiole spines are short, always shorter than the dorsal spines, and they may be reduced to a pair of short teeth. Separable from P. schistacea by the relative lack of erect hairs and the highly polished gaster.
The name ‘gagates’ means ‘jet black’.
Best iSpot pics are at:
www.ispotnature.org/node/493996
www.ispotnature.org/node/631790 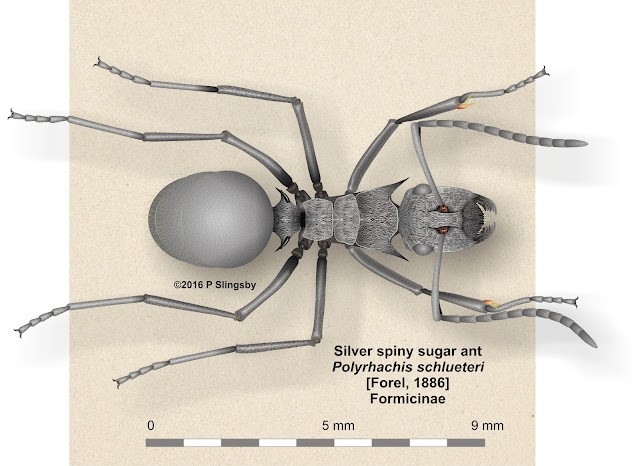 The workers range in size from about 8.5 to 9 mm. The actual body colour is dull black, but covered overall with very dense silvery pubescence. This gives the ants a uniquely distinctive appearance of being made from pure silver or even stainless steel [which sadly sometimes fades in dead specimens]. There are no erect hairs on the antennal scapes.
The ants are widespread in Southern and East Africa in hot, moist forest localities, but in South Africa they have only been recorded from KZN.
The nesting habits are not well recorded.
The petiole almost always has more than two spines, and the spines on the pronotum [first dorsal segment of the alitrunk or thorax] are long and downward curved.
The ant was named by Forel after Wilhelm Schlueter [1828 - 1919], a German entomologist and collector who sold specimens to make a living.
Best iSpot pics are at:
www.ispotnature.org/node/693242
www.ispotnature.org/node/735118
www.ispotnature.org/node/762445
www.ispotnature.org/node/764181
www.ispotnature.org/node/733950

Workers range from 7.7 to 8.5 mm. The body colour is black and shiny, with no pubescence or erect hairs; its appendages are brown and the antennal funiculi are yellow-brown. There are no hairs on the antennal scapes.
The ants are uncommon and have only been recorded from Durban to St Lucia in KZN. The nesting habits are unknown.
The petiole spines are long and vertical. The ants are distinguished by convex eyes, very weak metanotal groove, with weak pronotal spines.
The meaning of the specific ‘gamaii’ is unknown. Gamai is a Welsh word meaning ‘step’; also a French red grape variety – or it may be a Hindi word. Any offers?
No pics available at this stage.

Workers range from 7 to 8 mm. The body colour is black, with brown-black appendages and yellow-brown antennal funiculi. The ants are not hairy and the antennal scapes have no erect hairs. The best diagnostic of the species, however, is that, unlike any of our other local Polyrhachis, P. arnoldi has fine striations running longitudinally down its body, particularly the gaster. It is also distinguished by the propodeum which has a transverse ridge at the posterior end. The ants are rare and occur in hollows in trees, in shallow nests covered by a ‘lid’ of finely-woven silk with embedded bark and dirt; KZN and Malawi.
No pics available at this stage.

Workers range from 6.5 to 7.5 mm. Body colour: black, with brown or brown-red appendages and yellow-brown antennal funiculi. The best diagnostic is the transverse ridge between the propodeal spines that is raised into a tooth or third blunt spine. The propodeal spines themselves curve upwards and outwards. There are no hairs on the antennal scapes; the ants are not hairy at all. They are uncommon and nest in hollow stems or galls in trees, with the nest walls partly lined in silk. KZN and East Africa.
The name arose from a labelling error that misled Mayr into thinking the ants came from Cuba, which shows how important good, clear old-fashioned handwriting can be.
No pics available at this stage.

Workers range from 6.7 to 7.3 mm. Body colour: black, with brown appendages and yellow-brown antennal funiculi. The petiole has two pairs of well-developed spines, the dorsal pair being longer. The propodeum has no transverse ridge and no median tooth [see P. cubaensis above]; the ants have an all-over very sparse fine greyish pubescence. The ants are uncommon and their nesting habits are unknown; occur in KZN only.
Best iSpot pics are at:
www.ispotnature.org/node/611116

Workers range from 6 to 7.5 mm. Dull black all over with very sparse and short greyish pubescence. The apex of the scale is dramatically broadened so that it conceals the first segment of the flagellum; the antennal scapes have no erect hairs. The eyes are usually flatter than in other species. The outstanding diagnostic is that the inner pair of spines on the petiole are shorter than the outer, which is unique in the local genus. The ants nest in sandy soil, in grass or in low shrubs. In South Africa the ants are only recorded from KZN, but otherwise occur in Sub-Saharan Africa, West and East Africa but not in the dry south.
The generic name translates as ‘viscous’; the reason for the use of this epithet is not known.
No pics available at this stage.

The smallest of our local Polyrhachis, with workers from 6.0 to 6.5 mm. The colour is dull black, with dense greyish pubescence and abundant erect white to grey hairs. Antennal scapes are hairy with more than 30 erect hairs on each scape. Eyes protrude only slightly. The ants are thickset, but the margination of the alitrunk and hence the ‘armoured’ appearance varies in different individuals. This is savannah and veld species, only in KZN in South Africa but widespread in Central and East Africa.
Revoil was a French zoological collector who collected this species in Somalia in 1886.
Best iSpot pics are at:
www.ispotnature.org/node/647818